A defensive error by defender Ainsley Maitland-Niles along with Luis Suarez’s instinctive strike late on saw Barcelona come from a goal down to beat Arsenal 2-1 at the Camp Nou on Sunday to claim the Joan Gamper trophy for 2019. 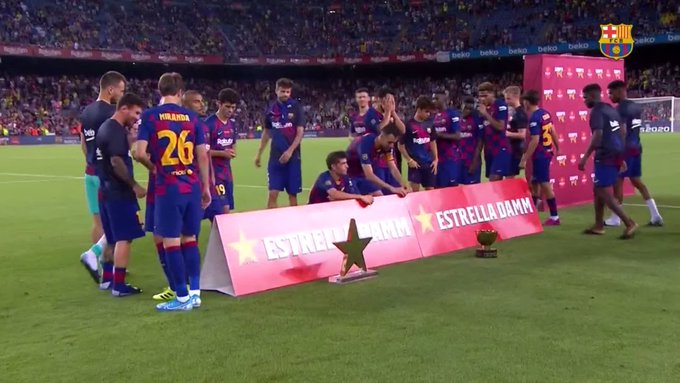 Pierre-Emerick Aubameyang put the Gunners in front 10 minutes before half time, controlling a Mesut Ozil pass and creating space with his first touch to get away from Jordi Alba and fire a shot into Neto’s top corner from just outside the area.

Barcelona dominated play and after seeing a goal-bound effort cleared off the line and new signing Antoine Griezmann see a goal ruled out for offside after good work from Ivan Rakitic in the build-up, the Spanish champions eventually levelled scores in comical circumstances.

A forward move from the home side broke down as the loose ball fell to Maitland-Niles whose backpass evaded goalkeeper Bernd Leno and trickled into the open goal despite the best efforts of the Arsenal shot-stopper and Sokratis Papastathopoulos in the 69th minute.The game looked set to go to penalties only for Suarez, who came on for Ousmane Dembele after the hour mark, ran on to a ball over the top of the Arsenal defence to send a first-time half-volley under Leno to earn Barcelona a 2-1 win.

Suarez’s goal brought smiles to the Barca bench which included icon Lionel Messi, back at the club at the end of his extended holiday following the 2019 Copa America campaign in Brazil earlier this summer.